Holding on to Hope

In the days following the presidential election, social media blew up with angry rants. People engaged in verbal fisticuffs, demonstrated, and threatened to move to Canada. But amid all the outrage and verbiage, the missing element seemed to be hope; hope for the future and trust in the God who is able to use anyone and anything to accomplish his plans and purposes.

This is a picture of my parents taken in 1956. They had been married almost nine years and were on a trip to Europe, primarily visiting Switzerland, where my father was 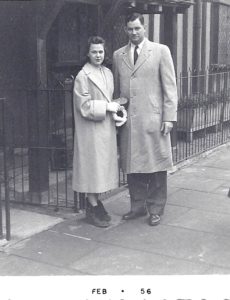 captured and interned during World War II. My parents were also still childless at this point in their marriage. My father came from a family of eleven and my mother from a family a seven, so childless was a hard place to be. I’d like to say they were still holding on to hope, but I’m not sure that was the case. It’s hard to honestly congratulate others on a second, third, fourth (or more) pregnancy when you are still awaiting your first, and even more challenging to answer, or deflect, questions that are hurtful, embarrassing, and the asker has no business positing in the first place.

Later that year, my mother went to the doctor because she was afraid she had cancer. She was shocked to learn her “cancer” was something else entirely, a nine-month condition that culminated with my birth. While my parents’ prayers were answered, and hope restored, many long for something that never comes to fruition. Perhaps they hope to love and be loved, wish for a job opportunity that never quite materializes, pray for a family member to finally address a devastating addiction, long for a cure for their chronic illness, or, in the case of my parents and many others, the gift of a child.

Not much in life is within our control. Even for the hardworking, well-organized, and hypervigilant, there are some things we just can’t make happen. When we lean on self-sufficiency and don’t trust God’s wisdom and capabilities, we lose hope. And when we decide a situation is hopeless, our perspective on everything changes. But holding on to hope makes the next step forward possible.

When we decide a situation is hopeless, our perspective on everything changes.

The Return of Green

Writing a Book and Other Life Endeavors