Restoration is Worth the Effort

Over the last few weeks, I’ve watched the painstaking renovation and restoration of a 1905-era historic home in my town. The house has served several purposes since the original owners built it, including that of an event venue. At one point, the house was for sale for over ten years with no takers. Potential buyers were hesitant, fearing restoration would cost more than the property was worth.

Earlier this year, local TV news reported the stately structure was slated for demolition to make way for upscale housing. Residents of the historic neighborhood where the house is located responded to the news, and a couple intervened, purchasing the house with restoration in mind.

Often, we give up when we realize restoring something will involve hard work and be costly, but here are some areas where restoration is worth the effort:

Sometimes, in the everydayness of life, goals and dreams get pushed aside in favor of what seems pressing and urgent. But in allowing goals and dreams to get sidetracked it becomes increasingly easy to lose sight of them. Restoring a goal and revisiting an idea that has always been a dream causes creativity and inspiration to flow again. But you have to be willing to work to go beyond that point.

As part of the restoration of the 1905 house, pieces of the porch ceiling had to be stripped away to check the supports to rule out potential structural problems. Once this was done, it revealed a simple fix—replacing some nails.

The same can be true of restoring your goals and dreams. Perhaps you let a goal slide or forgot about a dream because you envisioned obstacles, dreaded how complicated the solutions might be, and let that slow you down. Instead, when you uncover the real issues and you may discover reigniting forward motion is easier than you expected.

Often, we give up when we realize restoring something will involve hard work and be costly.

Preserving health takes time and determination. With age, health sometimes becomes less of a priority. It’s much easier to eat what entices and skip the gym today, and tomorrow, and for several months, until fitness falls off your schedule. And sometimes, we avoid going to the doctor because we don’t want to find out what needs attention or be reprimanded for not doing something important to our health. But now is a good time to take some small steps, experiment with some changes, and then, take some bigger steps toward restoring and maintaining health. 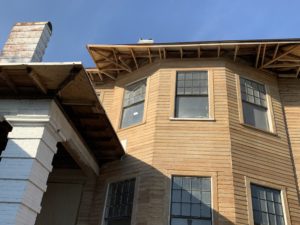 As part of the restoration of the 1905 house, the contractor experimented with various methods to remove years of exterior paint. Eventually, the best way was discovered, blasting with small shards of glass. In the same manner, your journey to better health may involve, blasting away misconceptions, being honest with yourself about detrimental habits, and trying multiple avenues. 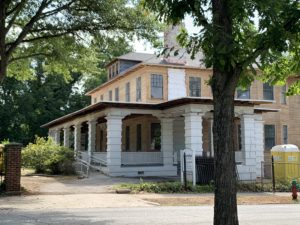 Perhaps preservation and restoration hold a special place in my heart because I’m the daughter of a builder. It pleased me to learn the restorers of the 1905 house removed, labeled, and saved trims and fixtures to prevent damage during restoration. Later, they will be reinstalled.

Sometimes, we’re not as careful with preserving elements in our life to prevent loss or damage. People, family members and friends, who were once important to you, may now be slowly disappearing from your life because of busyness, or proximity, or laziness. But maintaining connections and preserving relationships, memories, stories, and photographs is worth the work. 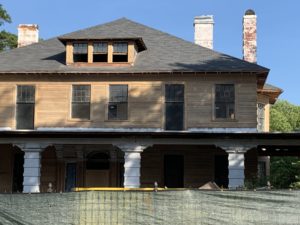 Is there a shaky relationship in your life that would be easier to demolish than restore? Do you fear the cost of attempting restoration—the dredging up of painful memories and hurtful words, the reopening of old wounds?

Broken relationships are among the most difficult areas of restoration. Often, mending a relationship involves swallowing pride, admitting your part in a rift, or saying you’re sorry when you feel others are the ones at fault.

Broken relationships are among the most difficult areas of restoration.

The hardest part of restoring relationships is forgiving, especially when others show no sign of remorse. Like water- or termite-damaged wood on an old house, some relationships can’t be restored because the other person is unwilling or unavailable. In those cases, you can free yourself of resentment through forgiveness, replacing the damage done long ago by extending grace to the ones who hurt you. Like any type of restoration, forgiveness is often tedious and painstaking, but it is also freeing.

The hardest part of restoring relationships is forgiving.

The 1905 house was redeemed, repurchased, ransomed, extricated from destruction because someone caught a vision of its value. Likewise, God’s great love, and the value he places on us, caused him to set in motion a plan for our redemption. His forgiveness and restoration serve as a model for us in our lives and relationships.

What area in your life is in need of the hard work of restoration?

“God, your God, will restore everything you lost; he’ll have compassion on you; he’ll come back and pick up the pieces from all the places where you were scattered.” Deuteronomy 30:3 MSG

5 Positives in This Current Crisis