Beneath a bejeweled sky, a baby’s cry pierced the night. Animal sounds and smells hovered in the air as a young mother placed her newborn on fabric strips spread across a hay-filled feed trough. God’s son entered the world inauspiciously, in a dirty stable, an unsuitable location for any human birth, especially the birth of a king. Yet God’s plan was perfect and completely in keeping with Jesus’ life and mission. 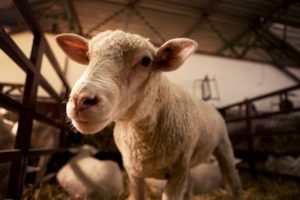 God’s ways of accomplishing his plans and purposes are rarely what we’d choose. An infant birth was not mankind’s expected method of redemption. A helpless, dependent baby hardly seems an appropriate rescue for a world riddled with strife and drowning in sin. There was no military takeover or government coup. God’s plan began with an everyday event—the birth of a child.

The birth of God’s son occurred in an unlikely location—a crude barn, in sharp contrast to the usual splendor and opulence of nobility. Roman rulers of the time were viewed as gods and their children were born to great pomp and fanfare. But there were no fabrics of silk or finely-spun brocade to cover the Christ-child and no attending physician or mid-wife. Yet the birth of this baby boy to simple Jewish parents concerned Herod enough to launch an all-out search for the child.

God’s ways of accomplishing his plans and purposes are rarely what we’d choose. 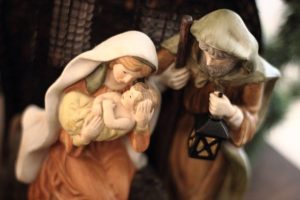 God has always chosen unlikely methods, locations, and people as agents for his plans. To the world, Mary and Joseph weren’t special. They were small town folks hardly worth mentioning. Yet we know from scripture that Joseph was a decent of David, thus fulfilling the prophecy of Isaiah. Beyond that, both Mary and Joseph possessed qualities—humility and obedience–that made them uniquely suited to parent the son of God.

Although she had questions and fears, Mary willingly, humbly, and immediately accepted her assignment to bear the Christ child. The fact that she was an unwed mother in a tiny, no doubt gossipy, town didn’t deter her from glorifying God for His selection of her for this unusual role.

Joseph’s obedience is apparent on several occasions. The first, when he accepted what the Angel of the Lord told him in a dream and took Mary as his wife rather than distancing himself from her. Surely, he had doubts about the wisdom of this action, but there is no indication that he argued or hesitated.

Later, when the Lord spoke to Joseph in a dream and instructed him to flee to Egypt with Mary and Jesus, Joseph trusted the message of this dream so fully he rose immediately, hastily prepared for the journey, and departed during the night. There was no arguing or waiting, no finding someone to run his business while he was away or making financial arrangements. Just simple, unquestioning obedience.

The announcement of the birth of this King came first not to the elite nobility, but to a nomadic, uneducated, unrefined band of sheep herders. Can you imagine the shepherds’ fear? Suddenly, against the vaulted expanse of a blue-black sky, blinding light and a chorus of angels joined an over-bright star. The heavenly hosts hovered with a rush of wings as the shepherds heard a glorious proclamation:

Fear not: for, behold, I bring you good tidings of great joy, which shall be to all people. For unto you is born this day in the city of David a Saviour, which is Christ the Lord. And this shall be a sign unto you; Ye shall find the babe wrapped in swaddling clothes, lying in a manger. And suddenly there was with the angel a multitude of the heavenly host praising God, and saying, Glory to God in the highest, and on earth peace, good will toward men.—(Luke 2:10-14 KJV)

With this news, the shepherds did what many of us fail to do when we’re introduced to Jesus. They immediately left what they were doing and made the quest for a personal encounter a priority. The unwashed shepherds were Jesus’ first visitors. They didn’t question the authenticity of the angel’s announcement. They knelt with unwavering belief before the tiny King. How unlikely.

God’s choice of the lowly shepherds reinforces the promise that God’s grace is available to all. Salvation is not just for an elite few. It’s for all who believe.

Why did people flock to Jesus? He was meek and humble, unlikely qualities for a charismatic personality. In the eyes of the world, he was unremarkable—no source of military or government authority and without the power to prevent his own arrest, torture, and execution. Yet Jesus was fully God and fully man. He was humbly born, But with the inheritance of heaven. He knew what it was to be hungry, tired, tempted, rejected, and scorned. He identified with man’s struggles.

The only event that came close to a kingly procession was Jesus’ triumphal entry into Jerusalem. But despite the hosannas, Jesus knew he was merely hours from death. In the Garden of Gethsemane, He cried out to his Father for strength and determination to keep his eyes on the goal and complete his God-appointed mission.

It’s impossible to understand the full impact of Jesus’s birth without looking at the fulfillment of his mission—the cross. How could death bring life? How could the humiliation of execution be fitting for a King?

Jesus’s birth, life, death, and resurrection were the fulfillment of prophecy—an unusual method of redemption accomplished by the death of a common man. Jesus’s credentials wouldn’t have gained him acceptance into any palace on earth, but His obedient submission to his Father gained Him a seat at the right hand of God. Because of Jesus’s sacrifice, we have an avenue to relationship with God the Father, a way forward. What an amazing concept, accomplished in such an unlikely manner. And it all began with a tiny babe, born in an unlikely location to unlikely parents.

Because of Jesus’s sacrifice, we have an avenue to relationship with God the Father, a way forward.