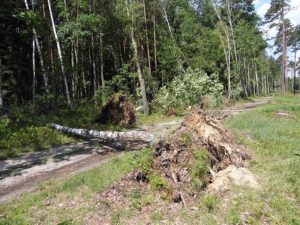 After several days of heavy rain and wind, a neighbor’s tree uprooted and fell across our street. Until the public works folks arrived to cut it up and haul it off, it was interesting to watch the reaction of drivers when they encountered this obstacle in their path.

Some drove up and stopped several car-lengths away and sat there, staring, as if thinking it were a train crossing gate that would miraculously rise in a few minutes and allow them passage. Others dared the tree to move out of the way, easing forward in their cars until the front bumper almost touched the tree, attempting to bully it out of their path. Still others drove up to the tree gesturing, mouths spewing words that, thankfully, were muffled by closed windows. These drivers then executed jerky three-point turns and floored the accelerator as they zoomed back the way they had come. And then, there were those drivers, who, with perception, spotted the obstacle in their way before they got to it, calmly pulled into a driveway, backed out, and headed to their destination via an alternate route.

Life is full of obstacles. They rarely appear at opportune times and finding a way around them is often not clearly defined. You can wait for them to move, try to bully them out of your way, get angry and make everyone around you miserable as you rant about inconvenience or injustice, or you can calmly map out an alternate route.

Here are a few things to remember when you encounter obstacles:

Expect them – We aren’t guaranteed an obstacle-free life and those who expect everything to run smoothly all the time will live with constant frustration and disappointment. What we can expect is God’s help in overcoming obstacles. He provides wisdom, courage, and support, if we’re willing to ask for help.

Don’t be cowed by them – Obstacles often destroy your resolve and diminish courage, but don’t give up. Start now to figure out what you need to do to circumvent your obstacles. Is it more training? Better connections? New skills? Once you’ve assessed the tools you need, take steps to attain them.

Be far-sighted – Often, with keen observation, you can anticipate potential obstacles before they actually block your path. Like the drivers who were aware enough to see the barrier up ahead and take a different route, anticipating obstacles requires focus and attention. Sometimes distractions prevent us from having a back-up plan in place before we hit a roadblock, but by anticipating potential problems, you can at least avoid being caught off guard.

Learn to flex – One of my father’s favorite phrases was “you’ve got to learn to roll with the punches.” When he was in the Army Air Corps during World War II, Daddy did a little boxing, and I assume he learned this adage during that time in his life. He was a master at taking things as they came, assessing obstacles, and then coming up with solutions, all with the calmness borne of a strong faith in God and trust in His wisdom and provision.

If you’ve ever watched trees during a storm, you know the ones that remain intact are those that have deep roots and are flexible. The wind may bend them all the way to the ground, but they a pliable enough to bounce back once the storm is over. It may take a while until they are fully erect again, and some are left permanently bowed, but they survive and thrive.

Often the roadblocks in life are like a relentless storm. Just when one barrier is overcome, another pops up. But as long as your roots are deep and you remain flexible, you can overcome obstacles and keep moving forward.

“Blessed are those who trust in the Lord and have made the Lord their hope and confidence. They are like trees planted along a riverbank with roots that reach deep into the water. Such trees are not bothered by the heat or worried by long months of drought. Their leaves stay green, and they never stop producing fruit.” (Jeremiah 17:7-8 NLT)

If you’ve ever watched trees during a storm, you know the ones that remain intact are those that have deep roots and are flexible. @CandyArrington