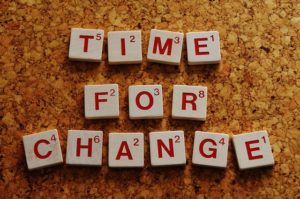 You’ve probably heard someone say, “Oh, I can’t change the way I am. I’m just like my father (or mother or some other relative) and he did (or said or believed) the same thing.” Blaming your words or actions on the influence of others is a poor excuse. You aren’t required to imitate the negative thoughts, words, and behaviors of those who influenced you as you were growing up, or from those who seek to influence you now. In fact, it should be your goal to avoid passing on negative qualities to the next generation.

People are often resistant to change because they are accustomed to their current thought patterns and behaviors and aren’t willing to put forth the energy required to change them. Personal change is never easy, but here are some good reasons to make the effort:

Personal change allows you to shake off old baggage. Have you ever seen someone carrying a bulging backpack that is too heavy? The weight of the bag alters everything about the one carrying it. It changes the posture as the person strains forward, compensating for the heavy burden. The extra weight even changes the gait and facial expression.

When my children were in school, I periodically encouraged them to take the time to clean out their backpacks. It was amazing what accumulated: crumpled papers, broken pens and pencils, mints, gum, crumbs, and occasionally, a molded-beyond-recognition food item in a tattered plastic bag.

Continuing the negative qualities you learned from others is like toting a heavy backpack full of broken resolutions and stinky attitudes. Perhaps it’s time to open your heavy pack and clean out some of the accumulated junk. Let go of the baggage that weighs you down and was never yours in the first place. Make some changes, clean things out, and lighten your load.

Personal change encourages taking responsibility for what you say and do. You may have noticed that  hardly anyone admits responsibility for actions or words anymore. Once confronted, the “spin” immediately kicks in, blaming someone else, or some other influence, for what the person said or did. Even when it is obvious the person made the statement or did the deed, he manages to skillfully talk his way out of it by placing blame elsewhere and sidestepping responsibility.

Personal change involves taking responsibility for yourself and not blaming outside influencers or circumstances. It means not blaming the environment, the government, your boss, your spouse, or anyone else. It means admitting your poor diet and failure to exercise, which are within your control, are the reasons for your health issues and not the fault of processed foods, stress, or busyness. Personal change means admitting when you messed up, altering your standard patterns, and asking for forgiveness when you have wronged others.

Continuing the negative qualities you learned over time keeps you looking backward. Instead, look ahead. Re-ignite forward motion by focusing on what is good and positive in your life. Look to God for direction, courage, wisdom, and blessings. Set a positive example for those around you. Be the one in your family who is remembered for changing negative patterns. With motivation and determination, personal change is possible.

“Don’t become so well-adjusted to your culture that you fit into it without even thinking. Instead, fix your attention on God. You’ll be changed from the inside out.” Romans 12:2 (The Message)

Continuing negative qualities learned from others is like toting a backpack.