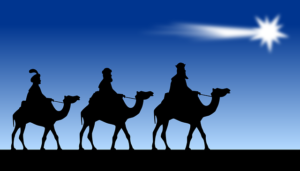 Often assigned the names Melchior, Balthasar, and Gaspar, I’ve enjoyed taking a closer look at the Wise Men this Christmas. I’ve always liked the minor melody of the carol We Three Kings and speculated on the background and personalities of the men from “orient are.”

If you follow the perspective of children’s picture books, nativity scenes, and Christmas pageants, these lavishly-robed figures, adorned with braid, tassels, jewelry, crowns, and bearing expensive gifts, often appear with the shepherds at the stable on the night of Jesus’ birth. However, Jesus was most likely a two-year-old, living in a house with his parents when the Magi arrived. Regardless of the timeframe, we can learn lessons about forward motion from the Wise Men.

The wise are seekers – A number of theories exist about who the Wise Men were and what prompted their search. Some speculate they were Jewish exiles who remained in Babylon and were familiar with Old Testament prophecy. Others believe they were eastern astrologers who studied ancient manuscripts, including the Old Testament, and pieced together the words of prophecy in conjunction with signs in the heavens. The Wise Men traveled thousands of miles in their quest to see and experience an occurrence of epic proportions.

How far are you willing to go to find that for which you are searching? What journey will you embark on to accomplish your goals? What would you sacrifice to act on a God-given directive? And will doubts and fears inhibit your quest?

The wise are givers – Just as the Magi came bearing gifts, the wise know the benefits of generosity. The gifts given to the Christ child likely funded the flight to Egypt and made provision for the years that followed.

Often the greatest gifts have no monetary value. Perhaps your goal for the coming year needs to be a decision to give more of yourself—your time, talents, and wisdom in service to others.

The wise are worshippers – Not many of us would be wise enough to recognize a child in a modest home as royalty, much less deity. Perhaps the Wise Men expected something different—a palace, royal robes, something that marked nobility. Yet, they put aside preconceived ideas, accepted, and worshipped. How often do you fail to recognize God at work in your life because His activity doesn’t meet your expectations?

The wise experience –  Those who are wise aren’t content to merely research or read about something and then sit on the sidelines. They want to experience firsthand the knowledge they have acquired. They want to confirm what they have deduced with their own eyes.

Because of their decision to follow the star that led them to Jesus, the Wise Men experienced great joy. And when they left, the discernment borne of wisdom, helped them heed the dream that warned them not to return to Herod and disclose the location of the child king.

Seeking takes great effort. It requires action. You can’t sit still and move forward at the same time. For most of us, wisdom is gained over time, and only by those who take the time to seek, find, discern, and apply knowledge to everyday life.

Humility and wisdom don’t always go hand-in-hand. That’s why it’s important to acknowledge God as the source of all wisdom and seek Him daily.

“Tune your ears to wisdom, and concentrate on understanding. Cry out for insight, and ask for understanding. Search for them as you would for silver; seek them like hidden treasures. Don’t be impressed with your own wisdom. Instead, fear the Lord and turn away from evil.” (Proverbs 2:2-4; 3:7 NLT)

Take the time to seek, find, discern, and apply knowledge to everyday life.

Life in the Rearview Mirror

Knowing When to Change Course