On the Edge of the Storm 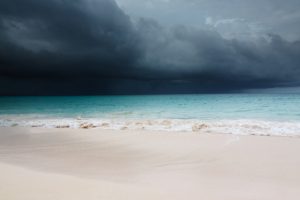 Earlier this week, the sky darkened and wind-whipped branches slammed into each other as leaves cascaded to the ground. Rain poured with ever-increasing force. While I knew rain was in the forecast, I was surprised to hear emergency sirens blast. Then a tornado warning text appeared on my phone. While we experienced high winds and torrential rain, it wasn’t until much later, when I watched the news and saw social media posts, that I realized the extent of the damage. Homes, businesses, and vehicles were destroyed as a tornado touched down in several areas of the county. However, our house had been on the edge of the storm and we experienced only downed limbs and loss of internet connection.

Our world is in a constant state of upheaval. Terrorist attacks, demonstrations, and political unrest churn around us on an almost continual basis. It’s hard to remain on the edge of the turmoil, to refrain from commenting and find peace in the midst of these storms. But if you make every battle your own, you destroy inner peace, squelch the Spirit, and inhibit forward motion.

Here are some ways to avoid allowing the chaos around you to hold you back:

Avoid fighting battles that aren’t yours – Some people are experts at dragging us into their problems either with a continual verbal dump of woes and struggles or by expecting us to provide on-going counsel. While there are times when being there for others is appropriate, beware the sapper who finds comfort in having your attention and does not respect your time. When you become entangled with this type of person, your life is not your own, and your time is spent supporting those who aren’t willing to change the things that precipitate their problems. Don’t allow compassion or guilt to draw you into battles that aren’t yours.

Detach from social media rants – More than ever, people feel entitled to express their opinions with loud and often combative verbiage. Unfortunately, social media provides a convenient bully pulpit for anyone who chooses to use it as such. I’m often surprised by seemingly benign individuals who ignite an uproar and fan the flames for days. While it’s tempting to get involved, to set someone straight, or inject words of reason, resist the urge. Remain on the edge of the storm. Your time is valuable and better spent on other pursuits. The frustration these types of encounters cause robs you of peace.

Take time for quiet reflection and prayer – When we look back on this time in history, what will we see? Families disconnected from one another because they are addicted to their individual screens and no longer have conversations. Creative pursuits thwarted by time wasted on inconsequential gaming or watching or bickering. In the midst of all they vies for your attention, time is seldom made for quiet contemplation and prayer, occupations that still fears and calm anxieties.

Dare to be different – Society pushes you to conform, accept, and tolerate. Instead, dare to maintain your beliefs and principles despite criticism. Be who you are. Avoid altercations and causes that accomplish nothing. Uphold the standards and cherish the beliefs that define you and move forward.

“Let all bitterness and wrath and anger and clamor and slander be put away from you along with all malice. Be kind to one another, tenderhearted, forgiving one another, as God in Christ forgave you.” Ephesians 4:31-32

Uphold the standards and cherish the beliefs that define you.

Restoration is Worth the Effort

Earthquakes and Other Disturbances