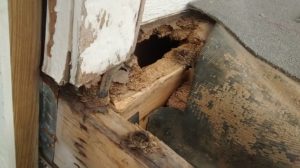 I grew up in a house my father built in 1951. Later he built an addition and remodeled other areas of the house. After my mother’s death, we did an major renovation, addressing some long-deferred maintenance. When we removed the kitchen cabinets, we discovered a water leak that wasn’t apparent. Years of undetected seepage had rotted the floor and part of the wall, leaving gaping holes.

More recently, we’ve battled a leak in the master bathroom shower. To look at the shower, you’d never guess there was a problem, but an inspection under the house revealed major issues. When the shower floor was torn out, damage was much more extensive than first thought.

Over the years, I have seen the results of issues that have been ignored in houses and also in people’s lives. When problems are finally addressed, they are far worse and more costly than they would have been if dealt with when first discovered.

Like the shower in my childhood home, you may have hidden culprits rotting away underneath a seemingly ok exterior. These issues slow you down or halt progress altogether, rendering you less than the person God created you to be.

Consider the following issues which may be festering out of sight and inhibiting forward motion:

Fear is a subject that should be addressed often because most of us struggle with it on some level on a regular basis. Fear holds you captive, preventing you from stepping beyond the comfortable, risking failure, and reaching beyond what’s easy. At times, fear also prompts un-thought-out decisions, which cause unwanted consequences. Thus, fear alternately prevents and prompts. The antidote for fear is faith. If God is leading you to move forward in an area where you lack confidence, trust him to equip you with the tools you need to accomplish the task.

Envy is a sneaky little entity that rots away at contentment. Often, envy becomes so much a part of your life that you don’t even realize you are constantly measuring yourself again others. But what you can’t see when you look at someone and envy what they have or who they are is what is hidden beneath the visible exterior. You don’t see their areas of insecurity, their relationship issues, health concerns, and emotional needs. We all deal with different types of hard stuff. Envying others is a waste of time and energy, energy that could be put toward your areas of your giftedness.

Satan is the father of all lies, an instigator of deception. Take an honest look at yourself and see if there are people you are deceiving with something big, like addiction, or something that seems more insignificant, like “little white lies.” Deception is deception. There are no degrees. All deception is wrong. And if you’re deceiving others you’re also lying to yourself. Decide to make honesty a priority. If you’ve followed a pattern of deception for many years, it may take a while to break the habit, but begin today to clean up the mold of deception that is multiplying in your life.

Many struggle with feelings of being unworthy or incapable. Perhaps you’re haunted by a time when you were excluded and that experience made you feel you didn’t meet some invisible standard. Or maybe someone in your life regularly criticized you, but rarely praised or encouraged. Sometimes low self-esteem results from impossible goals and levels of perfection you place on yourself and then can’t achieve. Remember, you worth is not dependent on what others think of you, or even what you think of yourself. True self-worth comes from your identity in Christ.

Failing to forgive those who hurt you is perhaps the most destructive of all the hidden culprits. Unforgiveness eats away at relationships. Harboring anger and resentment toward others is far more destructive to you than to those you refuse to forgive. The biggest damage is to your relationship with God, who instructs forgiving others as He forgives you. Forgiveness is hard, but it’s freeing.

If you recognize any of these hidden culprits in your life, take the time to assess the problems and make necessary repairs before irreparable damage occurs.

“Let’s make a clean break of anything that defiles or distracts us, both within and without.” 2 Corinthians 7:1 MSG